#292 How Procrastination Can Help You Get More Done 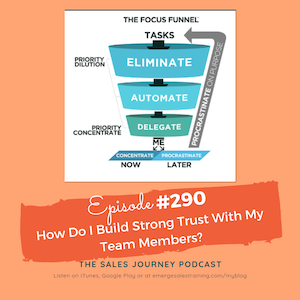 What if you could learn a productivity hack that would help you accomplish more?

With the holiday season kicking off you’ve probably already been hearing the season catchphrase “It’s the most wonderful time of the year!” And while I’m a TOTAL holiday junkie, I’ve also found that it can often be the busiest and most stressful time of year too.

Most of us are already pressed for time, then throw in cooking, family time, shopping, wrapping, and all the other “most wonderful things”….. it’s likely that our never-ending to-do lists just got even longer and the problem we all face is how to get it all done.

We all have 24 hours in a day and while I think most people try to organize their tasks by in order of urgency and importance, also known as prioritizing in order to get more done, the problem with prioritizing is that it doesn’t create more time.

It’s kind of like a giant game of Tetris: tasks continue to fall on our plate and while we’re constantly shuffling them from here or there, moving them up and down our task list, focusing on what matters most, at the end of the day we’re still left with things that remain undone and we end up feeling exhausted, overwhelmed and frustrated.

The truth is, there’s no such thing as time management. It just keeps going regardless of what we do or don’t do, so today I want to share a productivity hack where procrastination will actually help free up the time you have and help you get more done.

I know… I’m probably the first person giving you permission to procrastinate and you might think I’m crazy right now. So let me first clarify because I may not be thinking about procrastination the same way you are.

Rory Vaden, the author of Procrastinate on Purpose: 5 Permissions to Multiply Your Time talks about a difference between procrastination, normally understood as waiting to do something you know you need or should be doing because you don’t feel like it VERSUS intentionally deciding to wait to do something because now is the right time.

He goes on to discuss this idea of procrastinating on purpose, in essence, giving yourself permission to do things later, or perhaps, not even do them at all.

So what’s this awesome hack where we actually have permission to do things later? It’s called the Focus Funnel where you can sort your priorities or tasks into lists and evaluate where or what to spend your time on.

Imagine you’re staring at the top of the Focus Funnel with your never-ending laundry list of tasks. You take the first task and throw it into the funnel and the first question you ask is….

Can I eliminate this?

How important is this task to you? Is it even worth doing?? Is it possible to eliminate it all together? Being more productive is just as much about what you DON’T do as what you do DO because when we give ourselves the permission to say “NO”; anything we say “NO” to today, creates more time to say “Yes” to things tomorrow.

If you cannot eliminate the task, the next question you can ask is:

Can I automate this?

Do you have a process where you can automate this or can you develop a process to automate it? Anything you create a process for today will save you time tomorrow. While it takes time up front to create a process, it’s kind of like a time investment. Once it’s done, it frees up time that you can spend on other tasks later.

If it cannot be automated, the next question to ask is:

Can it be done by someone else?

The thought that they won’t be able to do it just like you can, and while that might be true in the beginning, it’s just temporary. Perfect is the enemy of good enough and giving yourself permission with someone doing “good enough” rather than “perfect” means that over time, they’ll eventually master the task just like you did, creating more time for you to do other things.

If you’re unable to eliminate, automate, or delegate the task, it falls out the bottom of the funnel and at that point, there is only one remaining question:

Must this task be done NOW or can it wait until later?

If the task must be done now this means it’s time to CONCENTRATE!!! This is all about focus, eliminating distractions, and #gettingitdone

However, if you answered “YES” to the question “Can this be done later?” this is where you can Procrastinate on purpose. This doesn’t mean this task gets put on the back burner forever; instead, it’s left in a holding tank where it will be filtered back through the funnel and eventually one of the other 4 strategies will be executed for this task later.

When you find the same task can always be done later and ends up making its way back through the funnel over and over again, you might be able to either to finally determine that it’s something you can actually eliminate, or develop a system to automate it.

Maybe at some point, you’re able to identify someone rising up to the occasion where you can delegate it, or you finally decide it’s something you need to spend your time on now.

Procrastinating on purpose means having the discipline to wait on doing something right now because we’re intentionally deciding that now is not the right time. And when you can learn to decide what you spend your time on today, this ultimately will free up more time for you tomorrow so you can get more done.

I’d love to hear what sort of impact this might have on your business, how this might help you to get more done, and what you’re deciding to procrastinate on purpose so feel free to reply to this email and let me know!

Let’s continue this conversation on getting things done!  Tasha is getting together with a few people on Wednesday, November 28th at 9:30am PT/12:30 pm ET to talk about focus. You can register at emergesalestraining.com/focus.

Have a great day everyone!